At first, you might think the revelation, oh, sorry, “allegations” that the National Security Agency and the FBI have been tracking info on everything from phone use habits to e-mails and social media messaging would be a major crisis for the organization. Thing is, what reputation do they have to worry about? The NSA and FBI directors do not hold elected office, their true measure of worth to the people in charge is the quality of information they deliver, and like it or not they’ve been delivering a heck of a lot of it.

How about these tech companies, though? You know, the nine accused of allowing the government to tap into their servers? Among their ranks are the biggest names in the business; Microsoft, Yahoo, Google, Facebook, PalTalk, YouTube, Skype, AOL and Apple all stand accused, and the Washinton Post has proof in the form of a slide, reportedly direct from the NSA: 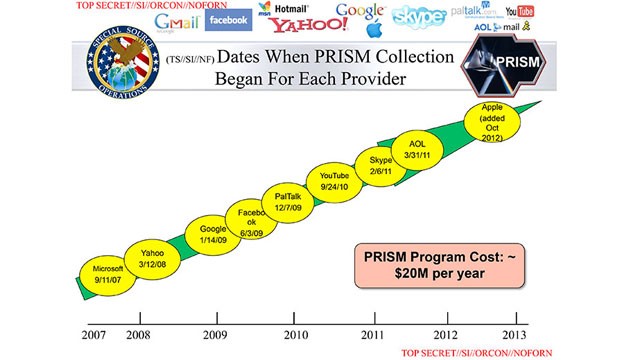 Unlike the NSA and FBI, these companies do rely on the public for their livelihood, and a quick search through any social media site will show that consumers are pissed.

Rock and a hard place?

One ABC News article, by Joanna Stern, posed the highly-believable theory that these companies are caught between a rock and a hard place, using the similarities of each organization’s statement on the issue to launch into a discussion of their position:

The similarity in all the statements is clear. All mention that they would only comply with orders for requests about access to information if forced to do so under the law and that they do not provide “back door” or “direct” access to their servers and to user account information.

Experts believe that commonality in statements could mean a few things. The first is that the companies simply can’t talk about this to begin with.

“If these companies received an order under the FISA amendments act, they are forbidden by law from disclosing having received the order and disclosing any information about the order at all,” Mark Rumold, staff attorney at the Electronic Frontier Foundation, told ABC News.

The fact is, regardless of what you feel is right — if you’re a U.S. company that receives a direct court order to comply with the FBI and NSA, and to keep mum about it at all costs — then that’s what you have to do.

What to do when you can’t speak out

The only crisis management for this one may be from the inside, with the companies involved working alongside government agencies to hammer out a solution that will work best for all involved. Looking on the bright side, at least for most companies on the list (sorry AOL and PalTalk), they are industry leaders, and provide some of the most-used services on the planet.

No matter how upset some users may be, at the end of the day they aren’t getting a better search than Google, their next virtual meeting will use Skype, and they’ll be posting pictures of their cat on Facebook before the night is over, giving these companies a far bigger cushion to fall back on than most can even imagine.